A PARTICLE IN A BOX

As I have explained in a previous chapter, to study the structure of the easiest and the most simple atom that is the atom of hydrogen, we have studied the postulates of quantum mechanics and their consequences, and now, we have to study some system to be ready to understand the atom of hydrogen. In a previous chapter I explained “the free particle”. Now I will explain “the particle in a box”. Go to the link to watch the video of the explanation. 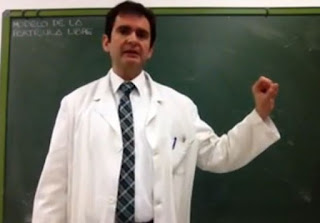 OK, now we are ready to start; we know the postulates of quantum mechanics and some of their consequences. But before trying to describe the most simple atom in the Universe, the hydrogen atom, we will study some systems as the free particle, as a particle in a box, as momentum angular operators and as the rigid rotor: Once we have studied all these systems, we could understand in a better way the mechanic quantum description of hydrogen atom.

But now, we will study something very simple, the system formed by one free particle. 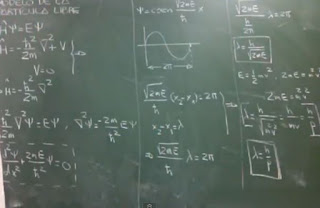 QUANTUM CHEMISTRY_CONSEQUENCES OF THE POSTULATES Of QUANTUM MECHANIC 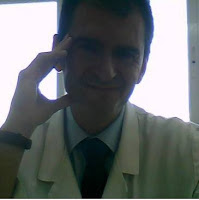 On the following two videos I am going to try to explain two consequences of the postulates of quantum mechanics, but there is a third one I am going to try to explain now; I am speaking about Heisenberg’s indetermination principle.
This principle is very important because one of its consequences is that we can not know the position and the velocity of an electron at the same time with precision. This consequence is very important because all the hypothesis about atoms structures that spoke about an electron orbit were wrong because of this reason.
In the quantum mechanic postulates we spoke that the system must be in a eigenstate to look for a group of eigenfunctions common to the observables we want to calculate. To find these common of group functions, the operators of observables must have commutative property. Unluckily, position operator and lineal momentum operator do not commute, so we can not find a common group of eigenfunctions for them and we can not write an eigenvalues expression which let us to know position and lineal momentum at the same time. 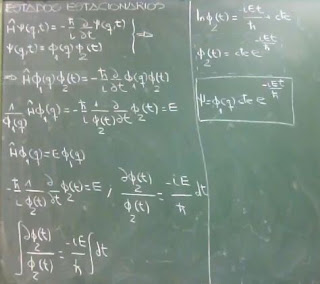 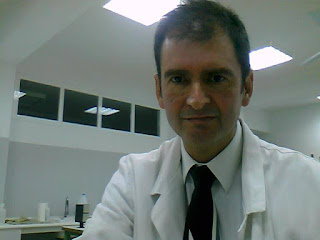 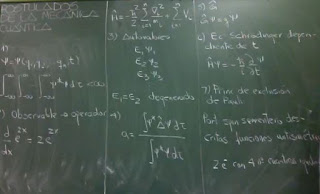 But how could Bohr be able to speak about electrons that do not emit energy in their motion? Think that it has no sense attending to electromagnetism classic. Who knows? May be he had in his mind the job done by Franck and Hertz about levels of energy. On the video, I try to explain. 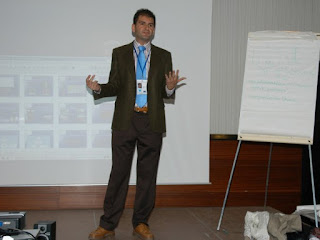 Alongside this chapter, I am going to explain in a not difficult way (I hope it), different topics about quantum chemistry. I will start with Bohr's atomic hypothesis that, despite of not being quantum chemistry theory, it is considered the fact that made quantum theory to be borned. 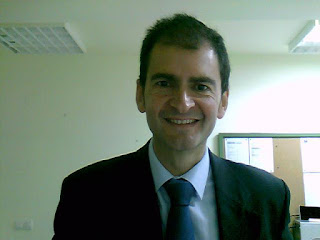 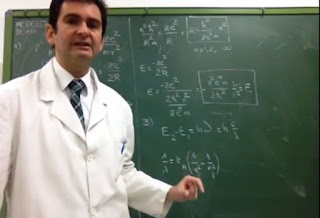 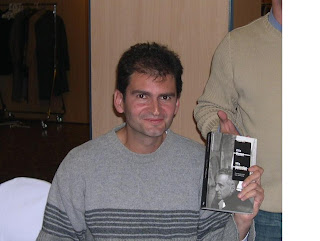 SULPHUR GROUP.
SULPHUR.
ALLOTROPIC FORMS OF SULPHUR.
Contrary to oxygen whose atoms form diatomic molecules with double bonds, tendency of sulphur to build a double bond with another atom of sulphur is less than tendency oxygen atoms have.
The most stable form is S8. Hybridization of atoms in this molecule is sp3, and there are simple bonds between atoms of sulphur. There are rhombic form and monoclinic form of S8 molecule, both yellow substances.
Stability of S8 is higher than stability of S6. Let us see these picture of S8 and S6.

To obtain it:
HCl  +  Na2S2O3  =  S6  +  NaCl  +  H2O
t = -10ºC
S6 is dissolved in benzene, and we will obtain S6 evaporating the solvent.
Sn: The molecule is a chains of atoms of sulphur bonded by the disappeared electrons which are in the terminal atoms.
Sulphur in solid state.
The most stable allotropic form of sulphur in solid state is rhombic form S8. It is not soluble in H2O. The solubility of S8 in C6H6, alcohols and ethers.  The solubility is high in CS2.
Sulphur in liquid state.
When we change the temperature, the increase of temperature produces changes of colors and viscosity, because of the changing of molecular structures.
There are different allotropic forms: S8, Sn, and S4. We can separate them attending to the different solubility they have in CS2.
The polymerization heat is nearly 0 because when there is a increase of temperature, the number of broken bonds and the number of built bonds are nearly the same.
The increase of viscosity is because the synthesis of chains of atoms of sulphur.
Sulphur in vapor state.
We can find molecules of S8, S4 and S2. When temperature is high, the percentage of simple molecules as S2 is bigger. If we cool the vapor to obtain, we can obtain  molecules of S4 in solid state. It is a diamagnetic molecule and it will be a purple solid. To get a fast cooling, we will need liquid nitrogen.
SELENIUM.
ALLOTROPIC FORMS OF SELENIUM
Red selenium: It is soluble in organic solvents. This solutions does not conduct electricity. The stability of this allotropic form is not very high, so red selenium converts in grey selenium very slowly. In this process, heat is produced.
Grey selenium is hexagonal, has metallic aspect, it is fragile and you can not solve it in organic solvents.
Liquid selenium is red brown.
Vapor selenium is yellow.
Electricity conductivity in selenium is low, but when temperature is high, conductivity is bigger, so we can say that selenium is a semiconductor (semimetal). Increase in electricity could be very big (1000 times) when we light selenium, so it is perfect for building photoelectric cells.
TELLURIUM.
We do not know molecules that form cycles in tellurium. It seems silver, because tellurium has the same bright. It has characteristic typical of no metallic, for example, you can obtain dust from tellurium.
Vapor tellurium is yellow.
Te2 is a paramagnetic molecule.
IONS OF ELEMENTS OF SULPHUR GROUP.
The trend to form negative ions decreases when atomic number increases (S, Se, Te).
When we go down in the group (S, Se, Te), the size of negative ions increases so polarizability will be higher and ionic character in the molecule decreases when we go down the group.
In aqueous solution, anions are bases.
S2-  +  H2O  =  HS1-  +  HO1-
HS1-  H2O  =  H2S  +  HO1-
Positive ions: We can find cations which have a cycle structure as:
S82+      Se82+      Te82+
The distance between atoms number 3 and 7 is bigger than the distance in a pure covalent bond, but that distance is not so big, so we can think that there is an one kind interaction between those atoms. 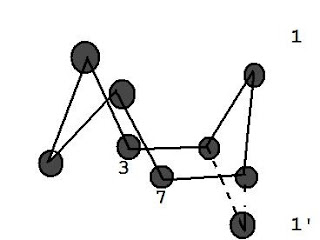 Position number 1’ is only for S82+. Position 1 is for Se82+ and Te82+.
To explain all we have just said, we have to think that this group of atoms are a big ion, so we can think that atoms number 3 and 7 have lost one electron, so both atoms have one single electron and we can think in a interaction between spins of two electrons.
Talking about tellurium, despite of not forming any structure, ion of tellurium form a cycle structure.
There are also bivalent cations of 4 atoms with a flat structure. The ion is like a square.
To obtain these ions we have to mix the melted halide with the element and aluminum chloride.
Te   +   TeCl4   +   AlCl3   =   2 Te4+   +   AlCl41- 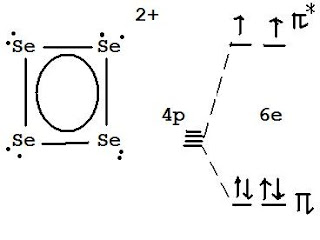 CHEMICAL PROPERTIES.
Sulphur and selenium reacts directly with hydrogen producing hydrogen sulphide and hydrogen selenide.
Contrary to we have just explained, we can not obtain H2Te using as reactives tellurium and hydrogen. Stability of hydrades decreases when the atomic mass of the atom which is bonded with hydrogen  increases.
Sulphur, selenium and tellurium react with halogens producing halides , and they also react with metals producing binary salts.
As oxidizing elements, its oxidizing capacity decreases when we go down the group, in fact we can not consider selenium as an oxidizing reactive.
HOW TO OBTAIN.
We can obtain sulphur in the nature (cheap method).
To obtain big quantities of sulphur, we produce this chemical reaction in industry:
2 H2S   +   O2   ->   2 H2O   +   S         ΔH<0
Fe2O3.
We can also obtain sulfur by reduction of sulfur dioxide that is produced in roasting process to obtain metals oxide from metals sulfur.
SO2   +   C   ->   CO2   +   S
We can obtain selenium by chemical reduction of selenium dioxide we obtain in lead rooms in the industry of sulfuric acid.
We can find tellurium in minerals that contain gold and silver.
Polonium appears in radioactivity process. To obtain 0.03 grams of polonium, we have to work with 103 tons pitchblende.
WE CAN USE SULFUR AND SELLENIUM FOR:
We will use sulfur for: Fumigation, synthesis of sulfuric acid, synthesis of carbon disulfide, rubber vulcanization, to produce powder.
We use selenium for making photoelectric cells, and to make ruby glass.
Publicado por DIAZ CONEJO en 2:38 No hay comentarios: